Stop Staples - The U.S. Mail is Not for Sale 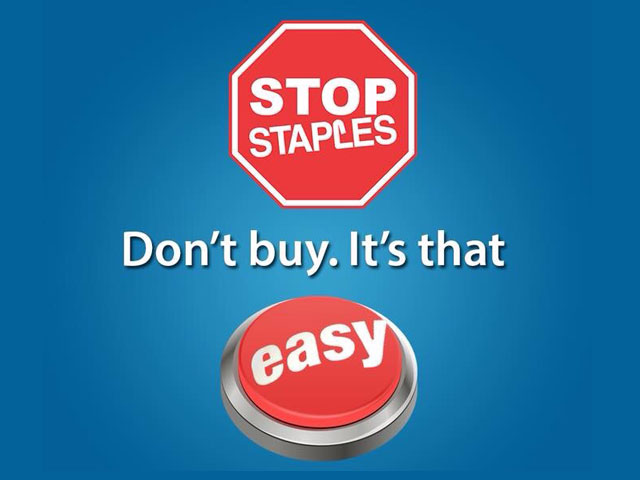 Stop Staples - The U.S. Mail is Not for Sale

Don't Buy School Supplies at Staples - It's Easy! Visit www.StopStaples.com for more information and to get involved.

Staples and the U.S. Postal Service have cut a deal that jeopardizes thousands of living-wage jobs – as well as your mail service.

A no-bid deal between Staples and the Postal Service set up postal counters inside 82 of the office-supply stores in four test markets – staffed with untrained, low-wage Staples employees. Staples and the USPS plan to expand the program to Staples’ 1,500 locations nationwide.
The sweetheart deal is replacing highly-trained, uniformed postal workers – who have taken an oath to safeguard the privacy and security of your mail and who earn a living wage – with Staples’ retail employees, who earn about $8.55 an hour.
If it is allowed to continue, the Staples deal will replace public post offices with private, for-profit companies whose decisions will be motivated solely by the bottom line. And it will replace good, stable jobs our communities need with low-pay, high-turnover, part-time positions that hurt our economy. That would be bad news for workers, consumers and the American people. So when you shop for supplies – for your classroom or your home – don’t shop at Staples.

Under increasing pressure, Staples and the USPS resorted to trickery to try to derail the boycott, announcing they are terminating the no-bid deal and replacing it with an “approved shipper” program. But the Postal Service has publicly acknowledged that the “new” program is the same as the old Staples program. In fact, USPS spokesperson Darleen Reid confirms to In These Times that “the Staples program, as it moves to the Approved Shipper program, will be offering the same exact suite of services that it offered before.”

This attempt at trickery shows that the ‘Don’t Buy Staples’ movement is having an effect. We intend to keep up the pressure until Staples gets out of the mail business. The U.S. Mail Is Not for Sale.