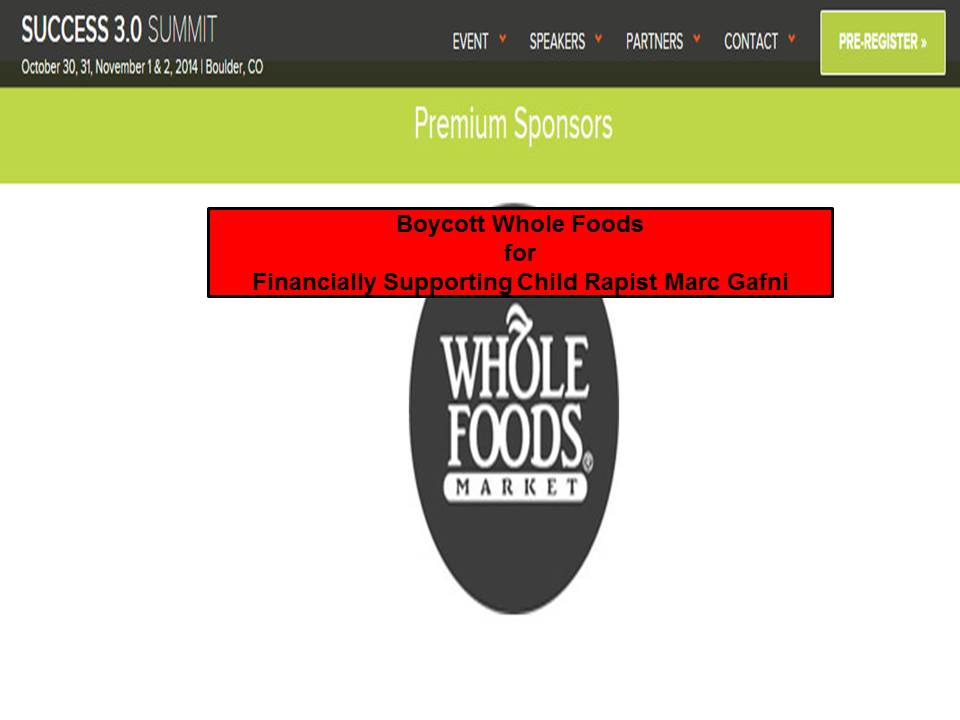 Whole Foods financial support of Marc Gafni, a known child rapist, and his organizations Success 3.0 Summit funneled through the European headquartered Center for Integral Wisdom (CIW) is accepting his past behavior as a pathological manipulator and rapist to young women.

Do not allow Whole Foods to reward unethical and illegal behavior with our money and support. It’s time consumers vote with their wallets through forced accountability: Boycott Whole Foods until they cut all financial ties with Marc Gafni (under any name an or organization) and immediately donate at least $1 million to a Jewish Crisis center for abused women as the women Gafni abused was when he was going by Rabbi Marc Gafni and not as he is now Dr. Marc Gafni. Boycott Whole Foods and do not support a company that supports child rapists.

UPDATED: November 14, 2014I reached out to Whole Foods and have not heard back but they are aware of this campaign as they viewed my LinkedIn Profile and two IPs from the Corporation viewed the first associated story below on the website:http://www.killingmycareer.com/the-sociopathic-business-model/boycott-whole-foods-until-they-cut-fin...Co-Ceo Whole Foods Market John Mackey and Gafni on several boards together. http://www.killingmycareer.com/the-sociopathic-business-model/whole-foods-market-the-sociopathic-bus...http://www.success3summit.org/partners.phphttp://www.success3summit.org/contact.php