Boycott Made In China 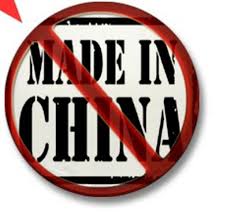 Boycott Made In China

3 companies
China has a long history of selling shoddy/dangerous/poisonous products to the US. They have virtually no regulation and some of the food and other products sold to the US are contaminated, poisonous, dangerous or just plain bad for you. In supporting this boycott you are also supporting Made in The USA, as well as sending a message that we will not tolerate crappy, dangerous or toxic products imported from China. As long as people keep buying their inferior products, they will keep producing them. Time to vote with your wallets!

Please read this great article from CNN which address this topic:
http://www.cnn.com/2007/LIVING/wayoflife/07/26/china.products/


Some companies that use Chinese products are Smithfield, Green Giant, Birdseye, Mars, Heinz, Cadbury, among many others.

From Wikipedia:
"On more than one occasion, Chinese-made products have caused global concerns about their quality and safety and resulted in large scale product recalls. In the 2007 Chinese export recalls, for example, product safety institutions in the United States, Canada, the European Union, Australia and New Zealand issued recalls and import bans on a wide range of Chinese-made consumer goods, such as pet food, toys,[9] toothpaste,[10][11] lipstick etc. During the 2008 Chinese export recalls, heparin was announced by the U.S. Food and Drug Administration (FDA) due to contamination of the raw heparin stock imported from China.[12][13] [14] During the 2008 Chinese milk scandal, an estimated 300,000 victims,[15] along with six infants dying from kidney stones and other kidney damage, and a further 860 babies were hospitalised[16][17] because some Chinese-made milk and infant formula were adulterated with melamine."

From bluedeltainvestigations.com:
"L-cysteine, an amino acid derived from human hair is harvested in China.  Human hair, from all parts of the body, is used to source this protein.  This amino acid is used to boost protein levels in bread sold in the United States.  Please look at the ingredients.  If it lists L-cysteine, you're eating bread laced with an amino acid that comes from human hair--from China.  The hair is gathered from the floors of barbershops and hair salons in China, and the morgue.  Duck feathers are also used to produce this amino acid."

Even the Chinese avoid products Made in China!
http://adage.com/article/global-news/chinese-consumers-trust-products-made-china/241165/

From philstar.com:
"The columnist lamented how tough it is to nourish growing sons in Beijing, what with reports of unsanitary food handling. Spotted last March were 16,000 dead diseased pigs floating down a major river that supplies water to Shanghai. Soon followed a thousand dead ducks bobbing in another river. Uninspected, uncertified fetid seafood, orange-dyed citruses, and toxic-fertilized Shandong apples openly are sold in markets and street corners. It’s unknown how many have been sickened by the unsafe chow. Invariably capping the scary news items are absurd assurances from Chinese authorities that everything’s under control. Clearly they have not learned hard lessons from their criminal silence on the SARS epidemic a decade ago.Because of price and volume, multinational food traders and processors turn to Chinese suppliers. The dirty foods find their way to every corner of the world, afflicting untold numbers of unwary eaters. Millions of fowls potentially infected with the new H7N9 bird flu strain are being exported to ASEAN countries. Ten persons already have died in China of the unsolved disease; two were poultry workers; a Taiwanese also died after visiting a chicken farm in China.Bird flu is just the tip of the pile of filthy Chinese meals. Last Oct. 11,000 children in 500 schools and daycares in Germany were downed by diarrhea and vomiting. The norovirus that hit them — 30 were hospitalized — was traced to a shipment of frozen strawberries from Shandong. Der Spiegel reported that over-fertilized vegetables, and fish fed feces of geese and pigs also have penetrated other European marts. Alarm spread recently in Vietnam because Chinese fruit imports overly were laced with deadly preservatives and pesticides.The problem is traced to spotty food and drug regulation by the Chinese government. There are also the patently unscrupulous. In 2008 the whole world went on alert due to deadly levels of melamine illegally added to increase the apparent protein content of pet foods and infant formula made in China. About 300,000 infants were sickened and six died in China alone. The head of the country’s food and drug agency was found to have taken bribes to ignore safety standards. Too often has it been reported that Chinese farmers do not eat their own harvests."
Campaign organized by: