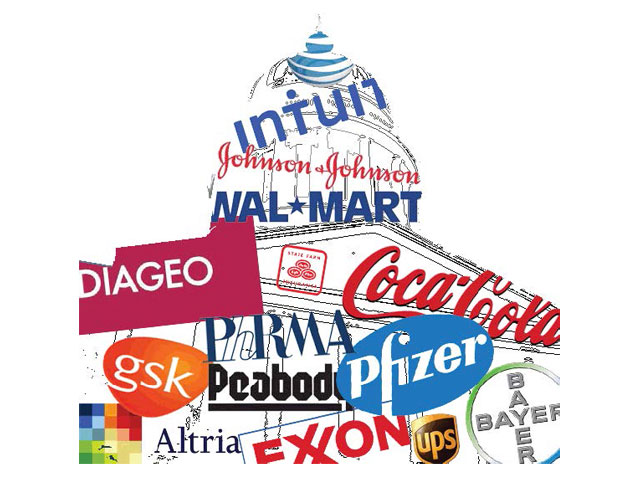 128 companies
The American Legislative Exchange Council (ALEC) is a 501(c)(3) American organization composed of legislators, businesses and foundations which produces model legislation for state legislatures and promotes free-markets, limited government, and federalism at the state level.

ALEC currently has more than 2,000 legislative members representing all 50 states, amounting to nearly one-third of all sitting legislators, as well as more than 85 members of Congress and 14 sitting or former governors who are considered "alumni". The vast majority of ALEC's legislative members belong to the Republican Party. ALEC also claims approximately 300 corporate, foundation, and other private-sector members.

In November 2011, Florida State Representative Rachel Burgin (R), introduced legislation to call on the federal government to reduce its corporate tax rate. The text still included the boilerplate "WHEREAS, it is the mission of the American Legislative Exchange Council to advance Jeffersonian principles of free markets, limited government, federalism, and individual liberty..." The bill was quickly withdrawn, the phrase removed, and was resubmitted as HM717.

After Florida passed its Stand-your-ground law, the American Legislative Exchange Council adopted its legislative language into one of its model policies.

"The Animal and Ecological Terrorism Act," a bill drafted by the American Legislative Exchange Council and used as a model in some of about a dozen U.S. state legislatures that have proposed such legislation, makes it against the law to film, videotape or make photographs on livestock farms in order to "defame the facility or its owner". People found to be in violation (for example, with a cellphone) would be put on a "terrorist registry."

Contributions from the prison industry and sentencing policies

Corrections Corporation of America and The GEO Group, two of the largest for-profit prison companies in the US, have been contributors to the American Legislative Exchange Council. Under their Criminal Justice Task Force, ALEC has developed bills which State legislators can then consult when proposing “tough on crime” initiatives including “Truth in Sentencing” and “Three Strikes” laws. Critics argue that by funding and participating in ALEC’s Criminal Justice Task Forces, private prison companies directly influence legislation for tougher, longer sentences. ALEC has also worked to pass state laws to create for-profit prisons, which served as a boon to both of the aforementioned contributors.

[Image is US Capitol by Bobby Mikul from PublicDomainPictures.net]

NOTE: The list of targets in this campaign are compiled from SourceWatch, but I am not affiliated with their organization. Note that Buycott does not have listings for every corporation on that list. Please contact me if an organization listed here has cut ties with ALEC and should be moved from Avoid to Support. You may reach me at AnaMardoll at gmail.