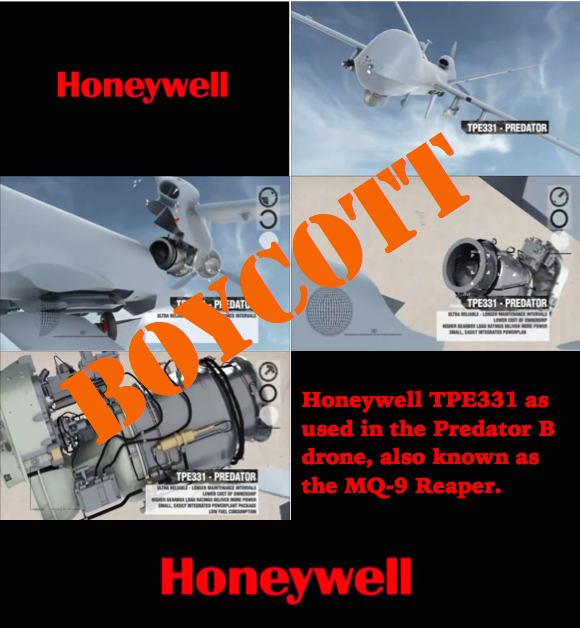 20 companies
According to a report by the Bureau of Investigative Journalism, the U.S. government's campaign of "targeted killing" by drone aircraft has already killed thousands of innocent people and continues to kill more, most notably in Pakistan and Yemen. Belying claims by President Obama and CIA director John Brennan of drone killing's "surgical" accuracy, reports of so-called "militants" killed rely on a definition of the word so broad as to be meaningless, one that allows for the killing of teenagers. And many accounts document how those lucky enough to be spared death or permanent disability by drone are nonetheless forced to cope with the loss of family, friends, and community leaders as well as constant harassment by the low-flying aircraft.

In addition to the violation of international law implicit in this killing, drone strikes have also been used to target and kill U.S. citizens, violating the constitutional right to due process. Victims of this disturbing practice include U.S. citizen Anwar al-Awlaki and his son Abdulrahman, killed in two separate drone strikes in Yemen in 2011. Far from an isolated incident, this is a practice that continues and has recently even been brazenly discussed in public and highlighted in the mainstream media.

Honeywell, America's top political donor, plays an instrumental role in and profits immensely from U.S. drone terror via their manufacture of the TPE-331 engine that drives the MQ-9 Reaper, workhorse of the U.S. drone killing campaign.

The letter below was recently sent to Honeywell CEO David M. Cote:

We, the undersigned, are among many, many people in theUnited States who are working to end the United States drone attacks and dronesurveillance that are killing and terrorizing thousands, if not tens ofthousands, of Afghans, Pakistanis, Yemenis and Somalis.  We believe that these acts are gross violations ofinternational law, the United States Constitution and the U.N. Declaration ofHuman Rights, all of which guaranteesthe rights to life, due process, privacy, freedom of assembly and free speech,among others.   Inaddition, we oppose the proliferation of weaponized drones, as well as the spreadinguse of drone surveillance, domestically and internationally. Theworkhorse of U.S. drone killing and surveillance is the MQ-9 Reaper drone, describedsometimes as a “hunter-killer” aircraft, which also used by the United Kingdomin attacks in Afghanistan.  It appearsthat the United States has built approximately 400 Reapers at the cost of about$16 million a copy, not including all the support equipment.  Others nations have bought or are planning tobuy Reapers. Honeywell’s website states that Honeywell “is proud to be asignificant content-provider for the MQ-9 Reaper.”   The website explains that Honeywell makes theTPE331-10 engine that propels the Reaper and provides certain navigationalequipment for the Reaper.   In addition, your website says that Honeywell is producingthe T-Hawk, a drone with “unique hover-and-stare capability” that enables“advanced intelligence, surveillance and reconnaissance”.  Honeywell’s “Code of Business Conduct” says the companyplaces “a high value on the integrity of the company and our directors,officers, employees, and representatives. Our reputation and our brand name mean a lot to us. From the shop floorto the boardroom, all Honeywell employees and representatives are expected tocomply with all laws and regulations in the countries where we do business, andadhere to our Code of Business conduct.” Included in Honeywell controls to ensure integrity, thewebsite says, are:“Legal and compliance reviews of proposed transactions thattake into account applicable legal restrictions, including health, safety,environmental stewardship, anti-corruption, trade controls and businessintegrity.” Given this commitment, we are asking Honeywell to:  (1) immediately stop providing engines, navigationalequipment and any other equipment and support for the Reaper drone and;  (2) disengage from all its other drone-related activities. Thank you for considering this request.  Please respond as soon as possible."

A response was not received. When confronted at the 2014 shareholder meeting, Mr. Cote refused to accept responsibility, stating "we will continue to abide by all laws." As Mr. Cote refuses to respect the legal and moral arguments for rescinding his involvement in the drone war, we will address him in the language he will understand, by Boycotting Honeywell's extensive and diverse line of consumer products. Join us, both to avoid being complicit in U.S. drone terror yourself and to send Mr. Cote the message that Americans will not tolerate those who corrupt our democracy and profit from death.
Campaign organized by: